50 facts about the Statue of Liberty 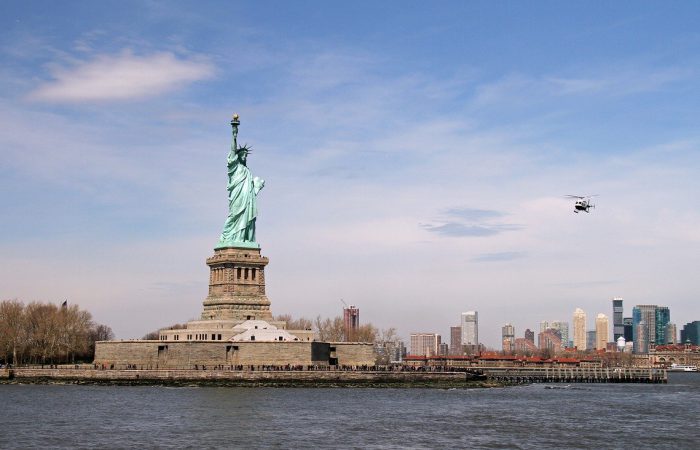 The Statue of Liberty is one of the most famous tourist attractions in New York, with approximately 4.44 million people visiting every year. There is so much more to the Green Goddess than you could ever imagine, so here at AmeriCamp we wanted to share 50 cool facts.

France gifted the statue to America in commemoration of the American Revolution. The monument paid tribute to the perseverance of freedom and democracy in the US.

Edouard de Laboulaye believed that the gift would inspire the people of France to fight for democracy against Napoleon III.

It was a French sculptor called Frederic-Auguste Bartholdi who designed the monument.

It was modelled on Libertas, the Roman Goddess of Freedom.

The full name is a bit of a mouthful; ‘Liberty Enlightening the World’. The Statue of Liberty certainly has a better ring to it.

The face of the statue is thought to be Bartholdi’s mother, Charlotte. That’s a Mother’s Day present that’s hard to beat.

Eugene Viollet-le-Duc was the first architect hired by Bartholdi to design the internal structure of the monument. However, he died unexpectedly in 1879.

Gustave Eiffel, the man who created the Eiffel Tower, was appointed to help design the statue. He replaced Eugene Viollet-le-Duc.

A contribution of $102,000 was raised by both France and America to help build it. It took 5 years to fundraise enough money.

In 1878, the statue’s head was put on display at the World’s Fair in Paris to drum up support for the project.

When the project was completed in 1885, it was disassembled into 350 pieces so it could be shipped to New York.

A French ship called Isere transported the statue from Paris to New York. However, it was touch and go as to whether the monument would arrive safely because the ship nearly drowned in a bad storm.

It took 4 months to reassemble the 350 pieces when they arrived in New York. The monument was officially unveiled in October 1886.

The unveiling was met with criticism from suffrage groups. How could a female figure stand in New York representing liberty, when American women didn’t have the right to vote?

The giant lady is made from over 300 overlapping copper plates. The copper weighs a total of 31 tons. That’s a lot of copper!

The copper plates that cover the statue have turned green due to oxidation.

The statue’s head was actually installed off centre, by just over two feet.

The crown has 25 windows. The windows are thought to represent ‘natural minerals’ of the earth.

The concept of liberty is bringing everyone together. The seven spikes on the crown, represent the seven continents and seven oceans.

At the feet of the statue you can see broken chains. This represents the broken shackles of oppression and tyranny.

To get to the crown you need to be fit, as you have to climb 354 stairs.

A total of 125 tons of iron was used to build the foundations.

Standing at 93 metres, it was the tallest iron structure ever built when it was unveiled in 1886.

The torch is covered in 24k gold leaf.

Get your binoculars out because the Date of the American Declaration of Independence is inscribed upon the torch and tablet.

It stands on a pedestal of granite fort in the shape of an 11-pointed star. The concrete used to build the pedestal weighs 27000 tons.

With a 35-foot waistline, the giant lady is certainly not a size zero.

If the Green Goddess was to go into Foot Locker or JD Sports for a pair of new shoes, she would need a size 879.

The island on which the statue is located was originally called Bedloe Island. It was renamed Liberty Island in 1956 by Act of Congress.

Liberty Island is closer to New Jersey than New York. In fact, it is situated on the New Jersey side of the Hudson River.

In 1984, the attraction was listed as a World Heritage Site.

The only way to get to the site is via ferry because no privately owned boats are permitted to dock at Liberty Island.

The statue could easily have ended up being built in Boston or Philadelphia. Both states made a play to get it.

It became a symbol of immigration. Between 1886 and 1924, 14 million immigrants came to the US through New York and it was the first they saw of America. Think of the film Titanic when certain passengers finally make it to New York.

In 1916, the torch was damaged due to an explosion during World War 1. Repair works cost an estimated $100,000 but due to the damage, the torch has remained closed to the public ever since.

At the end of World War 2, the crown flashed dot, dot, dot, dash. In Morse code, this is the letter V. This was to reflect the victory in Europe. There are two smaller versions of the statue. You’ll find a replica of the monument in Paris on an artificial island on the River Seine. The other can be found in Las Vegas.

If you take a look at a $10 bill, you will see two images of the statue’s torch.

Since September 11th only a select few visitors are able to enter the crown of the monument.

Two people have killed themselves by jumping from the top. Firstly, in 1929 and then in 1932. Although, less people have committed suicide there compared to Niagara Falls.

It can sway up to three inches in winds of 50mph and the torch can move up to five inches.

Every year the attraction is hit by 600 bolts of lightning. Ouch!

The monument has been destroyed twice, well, in films at least. It appears in ‘The Day After Tomorrow’ and ‘Independence Day’ starring Will Smith.

It has also made an appearance in the film ‘Planet of the Apes,’ buried half way up in sand.

The statue was meant to have a sister in Egypt. Bartholdi offered to build a similar sculpture for the entrance to the Suez Canal but his offer was declined due to cost.

It has lots of nicknames including; America’s Freedom, Lady on a Pedestal, Mother of Freedom, Saint Liberty and Green Goddess.

So, there you have it- 50 facts about the Statue of Liberty! With so much history, it’s no wonder that more AmeriCampers visit the statue than any other attraction.

The statue is also a picture perfect spot for our AmeriCamp after party and we get some great photos with the Green Goddess every year.

Click here to find out more about how AmeriCamp can help you explore America.